Even though this blog is read in more than 100 countries, surely nobody can be unaware of the furore about Brexit – the UK Government’s plan to leave the European Union.  The European Commission has been funding my research for more than twenty years and I am a frequent visitor to their Joint Research Centre in Ispra, Italy.  During the last decade, I have led consortia of industry, national labs and universities that rejoice in names such as SPOTS, VANESSA and, most recently MOTIVATE.  These are acronyms based loosely on the title of the research project.  Currently, there is no sign that these pan-European research programmes will exclude scientists and engineers from the UK, but then the process of leaving the EU has not yet started, so who knows… 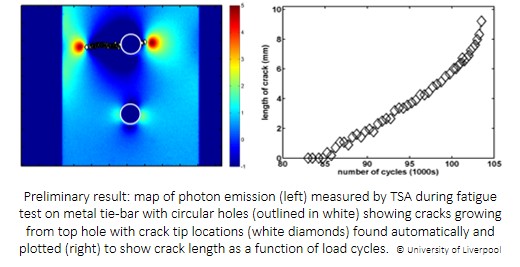 At the moment, I am working with a small UK company, Strain Solutions Ltd, on a EU project called INSTRUCTIVE.  I said these were loose acronyms and this one is very loose: Infrared STRUctural monitoring of Cracks using Thermoelastic analysis in production enVironmEnts.  We are working with Airbus in France, Germany, Spain and the UK to transition a technology from the laboratory to the industrial test environment.  Airbus conducts full-scale fatigue tests on airframe structures to ensure that they have the appropriate life-cycle performance and the INSTRUCTIVE project will deliver a new tool for monitoring the development of damage, in the form of cracks, during these tests.  The technology is thermoelastic stress analysis, which is well-established as a laboratory-based technique [1] for structural analysis [2], fracture mechanics [3] and damage mechanics [4], that I described in a post on November 18th, 2015 [see ‘Counting photons to measure stress’].  It’s exciting to be evolving it into an industrial technique but also to be looking at the potential to apply it using cheap infrared cameras instead of the current laboratory instruments that cost tens of thousands of any currency.  It’s a three-year project and we’ve just completed our first year so we should finish before any Brexit consequences!  Anyway, the image gives you a taster and I plan to share more results with you shortly…

BTW – You might get the impression from my recent posts that teaching MOOCs [see ‘Slowing down time to think [about strain energy]’ on March 8th, 2017] and leadership [see ‘Inspirational leadership’ on March 22nd, 2018] were foremost amongst my activities.  I only write about my research occasionally.  This would not be an accurate impression because the majority of my working life is spent supervising and writing about research.  Perhaps, it’s because I spend so much time writing about research in my ‘day job’ that last year I only blogged about it three times on: digital twins [see ‘Can you trust your digital twin?’ on November 23rd, 2016], model credibility [see ‘Credibility is in the Eye of the Beholder’ on April 20th, 2016] and model validation [see Models as fables on March 16th, 2016].  This list gives another false impression – that my research is focussed on digital modelling and simulation.  It is just the trendiest part of my research activity.  So, I thought that I should correct this imbalance with some INSTRUCTIVE posts.

2 thoughts on “Instructive report and Brexit”