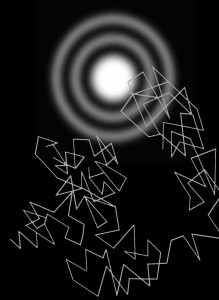 Random track of a nanoparticle superimposed on its image generated in the microscope using a pin-hole and narrowband filter.

A couple of weeks ago I bragged about research from my group being included in a press release from the Royal Society [see post entitled ‘Press Release!‘ on November 15th, 2017].  I hate to be boring but it’s happened again.  Some research that we have been performing with the European Union’s Joint Research Centre in Ispra [see my post entitled ‘Toxic nanoparticles‘ on November 13th, 2013] has been published this morning by the Royal Society Open Science.

Our experimental measurements of the free motion of small nanoparticles in a fluid have shown that they move slower than expected.  At low concentrations, unexpectedly large groups of molecules in the form of nanoparticles up to 150-300nm in diameter behave more like an individual molecule than a particle.  Our experiments support predictions from computer simulations by other researchers, which suggest that at low concentrations the motion of small nanoparticles in a fluid might be dominated by van der Waals forces rather the thermal motion of the surrounding molecules.  At the nanoscale there is still much that we do not understand and so these findings will have potential implications for predicting nanoparticle transport, for instance in drug delivery [e.g., via the nasal passage to the central nervous system], and for understanding enhanced heat transfer in nanofluids, which is important in designing systems such as cooling for electronics, solar collectors and nuclear reactors.

Our article’s title is ‘Transition from fractional to classical Stokes-Einstein behaviour in simple fluids‘ which does not reveal much unless you are familiar with the behaviour of particles and molecules.  So, here’s a quick explanation: Robert Brown gave his name to the motion of particles suspended in a fluid after reporting the random motion or diffusion of pollen particles in water in 1828.  In 1906, Einstein postulated that the motion of a suspended particle is generated by the thermal motion of the surrounding fluid molecules.  While Stokes law relates the drag force on the particle to its size and fluid viscosity.  Hence, the Brownian motion of a particle can be described by the combined Stokes-Einstein relationship.  However, at the molecular scale, the motion of individual molecules in a fluid is dominated by van der Waals forces, which results in the size of the molecule being unimportant and the diffusion of the molecule being inversely proportional to a fractional power of the fluid viscosity; hence the term fractional Stokes-Einstein behaviour.  Nanoparticles that approach the size of large molecules are not visible in an optical microscope and so we have tracked them using a special technique based on imaging their shadow [see my post ‘Seeing the invisible‘ on October 29th, 2014].