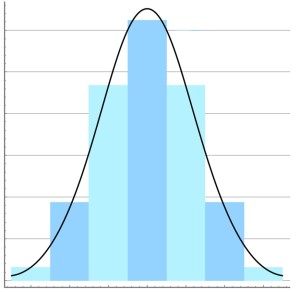 I have written before about why people find thermodynamics so hard [see my post entitled ‘Why is thermodynamics so hard?’ on February 11th, 2015] so I think it is time to mention another subject that causes difficulty: statistics.  I am worried that just mentioning the word ‘statistics’ will cause people to stop reading, such is its reputation.  Statistics is used to describe phenomena that do not have single values, like the height or weight of my readers.  I would expect the weights of my readers to be a normal distribution, that is they form a bell-shaped graph when the number of readers at each value of weight is plotted as a vertical bar from a horizontal axis representing weight.  In other words, plotting weight along the x-axis and frequency on the y-axis as in the diagram.

The normal distribution has dominated statistical practice and theory since its equation was first published by De Moivre in 1733.  The mean or average value corresponds to the peak in the bell-shaped curve and the standard deviation describes the shape of the bell, basically how fat the bell is.  That’s why we learn to calculate the mean and standard deviation in elementary statistics classes, although often no one tells us this or we quickly forget it.

If all of you told me your weight then I could plot the frequency distribution described above.  And, if I divided the y-axis, the frequency values, by the total number of readers who sent me weight information then the graph would become a probability density distribution [see my post entitled ‘Wind power‘ on August 7th, 2013].  It would tell me the probability that the reader I met last week had a weight of 70.2kg – the probability would be the height of the bell-shaped curve at 70.2kg.  The most likely weight would correspond to the peak value in the curve.

However, I don’t need any of you to send me your weights to be reasonably confident that the weight of the reader I talked to last week was 70.2kg!  I cannot be certain about it but the probability is high.  The reader was female and lived in the UK and according to the Office of National Statistics (ONS) the average weight of women in the UK is 70.2kg – so it is reasonable to assume that the peak in the bell-shaped curve for my female UK readers will coincide with the national distribution, which makes 70.2kg the most probable weight of the reader I met last week.

However, guessing the weight of a reader becomes more difficult if I don’t know where they live or I can’t access national statistics.  The Reverend Thomas Baye (1701-1761) comes to the rescue with the rule named after him.  In Bayesian statistics, I can assume that the probability density distribution of readers’ weight is the same as for the UK population and when I receive some information about your weights then I can update this probability distribution to better describe the true distribution.  I can update as often as I like and use information about the quality of the new data to control its influence on the updated distribution.  If you have got this far then we have both done well; and, I am not going lose you now by expressing Baye’s law in terms of probability, or talking about prior (that’s my initial guess using national statistics) or posterior (that’s the updated one) distributions; because I think the opaque language is one of the reasons that the use of Bayesian statistics has not become widespread.

By the way, I can never be certain about your weight; even if you tell me directly, because I don’t know whether your scales are accurate and whether you are telling the truth!  But that’s a whole different issue!

2 thoughts on “Uncertainty about Bayesian methods”