Someone has suggested that I should write more about what engineers do.  So here is the first in a series of posts in that vein.

A few weeks ago, I went to the ‘Future Powertrains Conference‘ held at the National Motorcycle Museum near Birmingham, UK.  A ‘powertrain’ is the system that creates and delivers power to the wheels of vehicles.  It is at the heart of a motorcycle but they were not discussed at the conference and instead the discussion was about cars and commercial vehicles.  There was a big focus on achieving the EU commitment under the Kyoto Protocol to reduce greenhouse gas emissions (GHG) to below 18% of 1990 levels.

Electric powertrains figured strongly and would certainly improve the air quality in our urban environment but they shift the GHG emissions problem to our powerstations [see my post on ‘Energy Blending‘ on May 22nd, 2013 and on ‘Small is beautiful and affordable in nuclear powerstations‘ on January 14th, 2015]. Even so, the high energy density of fossil fuels means that they remain a very attractive option.  The question that engineers are trying to answer is whether their GHG emissions can be reduced to below 18% of their 1990 levels.

When you plot CO2 emissions as a function of kerb weight for all passenger cars the graph reveals that the best in class achieve about 0.1 grams CO2 emitted per kilogram of kerb weight.  Kerb weight is the term used for the weight of a car without passengers or luggage but with a full fuel tank.  Of course, this means the simple answer is that we should all drive lighter cars!

The EU has assumed that most of us will not opt for lighter cars and has introduced legislation which is forcing manufacturers towards 0.02 grams CO2 per kg, which is a huge challenge that is being tackled at the moment by engineers, such as Paul Freeman at Mahle Powertrain Ltd who spoke at the conference.  To help meet this challenge, the UK Automotive Council has produced a series of technology roadmaps such as the one shown below and discussed by Dr Martin Davy from Oxford University during the conference.

As an alternative, we could move more quickly towards driverless cars which would both use the powertrain more efficiently and reduce the risk of accidents to almost zero.  A very small risk of accidents would allow lighter cars to be designed without a heavy crash-resistant cage.  But, as one conference delegate commented on ‘driving’ a driverless car “where would be the fun in that!”  Perhaps that shows a lack of imagination. After all, we can create exciting and safe fairground rides in which you have no control over the ‘vehicle’ into which you are strapped.  So why shouldn’t there be an ‘extra excitement’ button in a driverless car in just the same way that some modern cars have a ‘sport’ button. 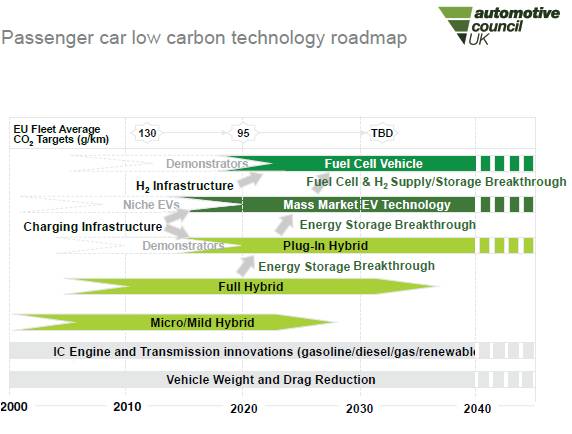